at work at home in the community

Giving Canadians a solid floor to stand on

Beyond a multitude of healthcare savings, a basic income would improve educational outcomes, lower crime rates, and provide financial remuneration for care work – to say nothing of the moral imperative of eradicating poverty and food insecurity in Canada.

Every year, Community Food Centres Canada staff carry out an evaluation of programs at all of our partner sites. We speak with participants and hear inspiring stories of lives transformed through good food and new friendships. We also hear frank accounts of lives lived in poverty. These stories detail the difficult choices made by one in seven Canadians and fly in the face of the tired adage that people living in poverty must pull themselves up by their bootstraps.

This year, I spoke with an injured worker whose disability payments didn’t cover basic expenses, to a man whose divorce left him penniless, to a woman whose post-traumatic stress disorder left her unable to work, and to scores of others who made use of food banks and drop-in meals despite not fitting in with the stereotype held by many of people living in poverty. Community Food Centres offer people a welcoming place to go, a healthy meal, a feeling of purpose, and a voice for change. But much more is needed. These stories make clear the urgent need for governmental action that effectively addresses the fact that four million Canadians, 1.15 million of them children, must worry about putting food on the table.

Community Food Centres Canada and Food Secure Canada have proposed such action: we are calling on the federal government to explore a basic income.

Income is the single largest determinant of health.

Basic income — which would set an income floor beneath which no Canadian could fall — has been proposed by prominent economists, politicians, and social activists for decades and piloted in five North American regions, including Manitoba. Any Canadian whose income fell below a certain level would receive a top-up through the tax system, effectively ensuring that no Canadian would ever again have to try to make a life on the absurd monthly income of $656.

To be sure, this is an expensive proposal. Estimates run in the $30- to $50-billion range, roughly ten or 15 percent of the federal budget. But before you balk at this number, consider that poverty currently costs Canadians up to $86 billion a year. Income is the single largest determinant of health. In the five years residents of Dauphin, Manitoba were afforded a basic income, for example, hospitalization rates decreased 8.5 per cent. Given that hospital stays account for nearly 30 percent of healthcare spending in Canada, a decrease of this magnitude across the entire country would save billions. 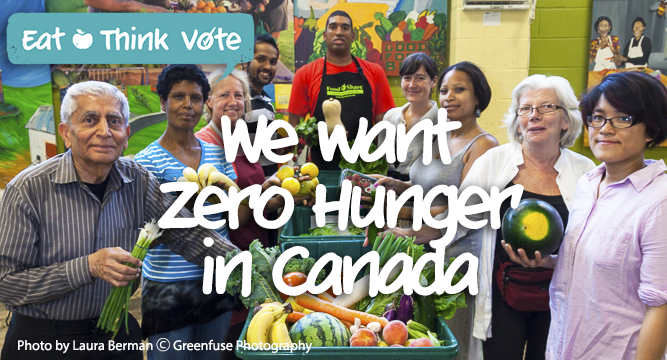 Sasha McNicoll has been with Eat Think Vote in 2014, and has five years' experience in the field of food security, as well as a background in environmental movements. Sasha holds a master's degree in Environmental Studies from York University and has in the past worked for Food Secure Canada, Sustain Ontario, West End Food Co-op and Greenpeace International. She has also served on the Toronto Food Policy Council, and the Toronto Youth Food Policy Council.